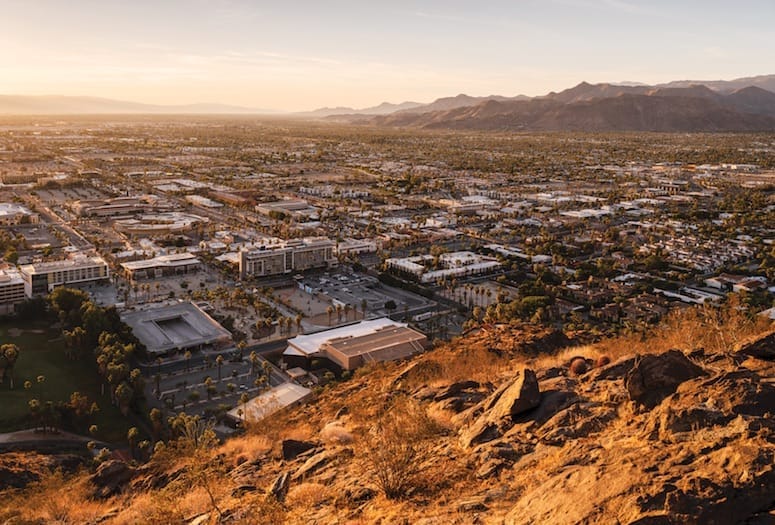 “Many small towns are facing the loss of their city centers due to vacant storefronts, dilapidated areas and crime,” she says. “With us, it’s the opposite. Ours is revitalized.

Ignoring the fact that Palm Springs has no place to moor ships, people eagerly deposited $ 10,000 deposits in residential lofts in Port Lawrence, which in 2007 promised to introduce a residential life of luxury in downtown Palm Springs.

The buildings were demolished to make way for the 4-acre project at Palm Canyon Drive and Alejo Road. But the promise of 2007 turned into the precipice of 2008 when the national economy collapsed.

Although the revival came too late for the original plans, the value of a footprint in the downtown area of ​​an alluring city can only be depressed for a while, right?

Audible sigh. The answers too often come in the form of yes and no.

In 2015, city and tourism officials introduced the property as the site of an Andaz hotel. This year brought the news that it would be renamed the Thompson Hotel (both are in the Hyatt portfolio).

Granted, it is 841 acres shorter than Central Park in New York City, and therefore cannot accommodate a zoo. But Palm Springs’ new 2-acre park gives the city bragging rights. After all, most city centers do not “give up” the ground that could generate income through commercial development. The site, which historically hosted guests seeking a wellness retreat, influenced the designers of the park.

“Nellie Coffman, the founder of Desert Inn, embraced the space, stillness, solitude and simplicity of Palm Springs,” says Nate Cormier, studio general manager at RIOS. “Our goal was to imbue the park with that spirit.”

The Los Angeles-based company used 3D modeling software to measure shade coverage at different times of the day and year to provide sun protection in the field. The result includes 135 native palm trees, as well as 13 shade trees and an event canopy inspired by palm leaves. Ambient cooling will also come from cascading water and a splash zone with pop jets and fog emitters.

Additional features include an event lawn with amphitheater seating, public restrooms and a police station.

Lawrence Kocher and Albert Frey proved the practicality of mass-producing structures with “ready-made” materials by designing a house for the New York City Architectural and Allied Arts Exhibition in 1931. The Luminaire House Foundation donated the building to the Palm Springs Art Museum. in 2020, to be reassembled at the southeast corner of the museum.

While construction took longer than the 10 days of 1931, no one can deny that it makes sense to have the Alumina in Palm Springs, given Frey’s connection to the city (including his design for City Hall). The structure should be ready for outside visits at the end of this month.

“Phase 2 for the interior is still in the planning and fundraising stages,” says Scott Slaven, museum marketing director.

Recognizing the indigenous peoples of Palm Springs, the Agua Caliente cultural plaza on Indian Canyon Drive will feature a museum, spa, and outdoor spaces for reflection and gathering. For years, the Native American tribe has relied on its museum presence in a collection of small structures on South Palm Canyon Drive that pay homage to the history and pioneers of Palm Springs.

Life in Palm SpringsThe October issue of two years ago announced a concerted effort to revive the downtown theater, which debuted in 1936 and has been closed since 2014.

As anyone who knows show business knows, timing is everything. Donations started pouring in and a benefit concert featuring Nancy Sinatra sold all 800 seats. Then a pandemic hit the party. Large donations have been canceled. The activity of the executive committee of Save the Plaza Theater has stalled. And $ 160,000 in the bank falls short of the goal of raising at least $ 10 million.

But hope is eternal. In January, the Oasis Music Festival could rekindle the night light.

“I think the theater is so important for the downtown area to be a destination for arts, entertainment and culture,” says Frank Jones, president and editor of the festival organizer. Life in Palm Springs. To this end, he has pledged a minimum contribution of $ 10,000 from festival proceeds, as well as exhibition and contribution opportunities via a donation box and hashtag, as well as a call to the city ​​(in collaboration with JR Roberts, Chairman of the Steering Committee) for $ 50,000 in repairs and upgrades. (approved by council in July).

“The theater is the grande dame of theaters because of its history,” Jones says. “It’s natural to make it a focal point for the downtown experience.”