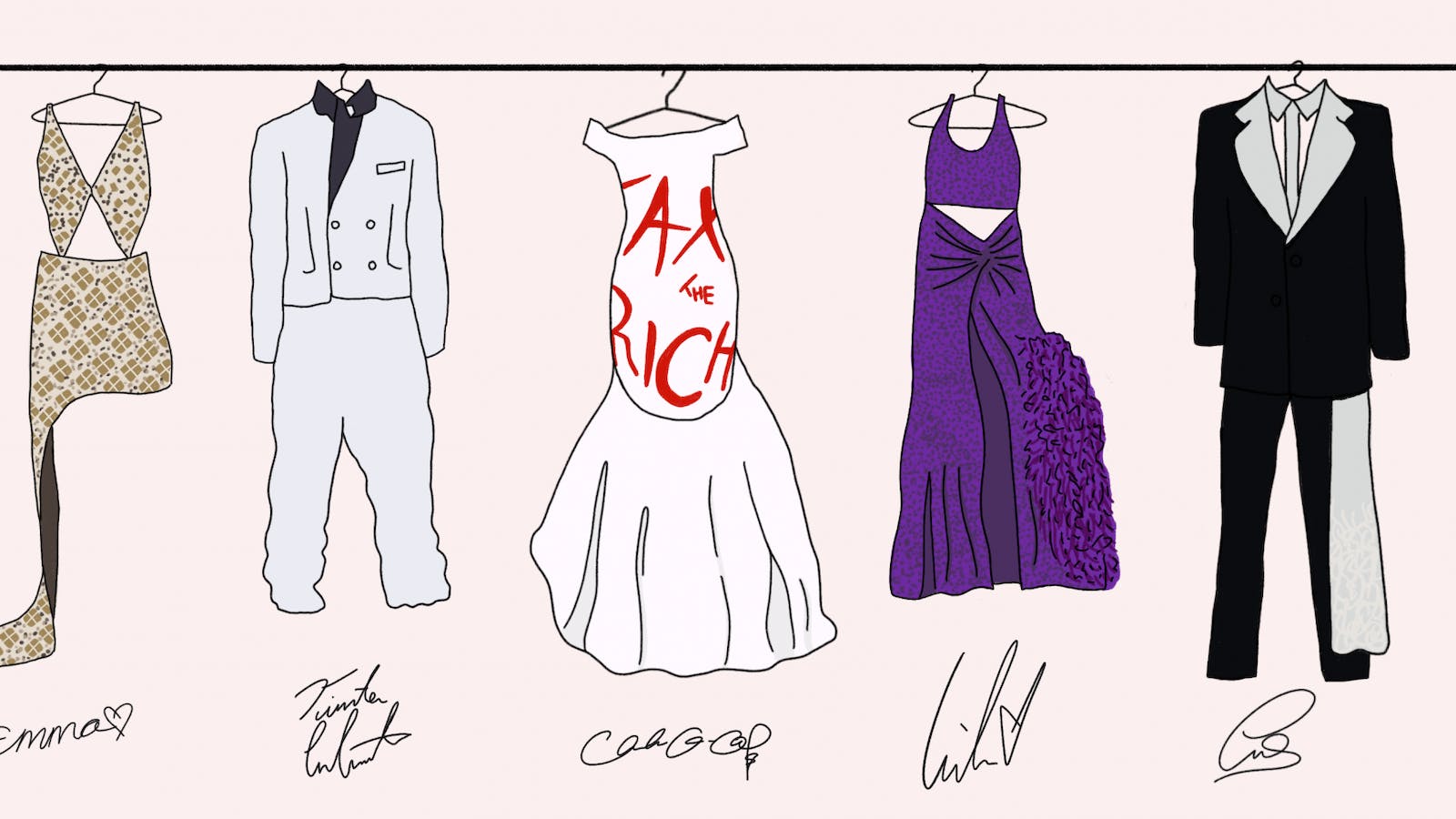 The nation’s largest student magazine hosted the event on September 13 at Crybaby’s, a boutique bar located at 1 W University Ave. Inside Crybaby’s, a projector was showing the Met Gala for everyone to watch, along with drinks and hangouts.

According to Rowdy’s co-editor, Gabi Moreno, attending the event should have generated a lot of interest within the Gainesville community.

Ana Escalante, fourth year journalism at UF and former editor-in-chief of Rowdy, came up with the idea for this trendy watch party.

During her tenure as editor, there were no in-person events due to the COVID-19 pandemic.

“I think everyone after COVID wanted some sort of escape,” Escalante said. “Or to have some kind of reconnection with each other to be dressed in this fun, formal camp-y way.”

The theme of this year’s “Met Gala” was “In America: A Fashion Lexicon,” which celebrated American creations and designers.

Escalante was virtually covering the event for her PAPER Magazine internship, so when she arrived at the event later that night, she described the attendees as “dressed as new.”

“I think this event really brought the artistic community together, which Rowdy is really trying to do in every aspect of her production,” Escalante said.

While covering New York Fashion Week, Escalante met Anna Wintour, editor-in-chief of Vogue Magazine and responsible for the guest list at the Met Gala each year, while she was dressed like her. She described her outfit as a white and red tweed ensemble with a printed turtleneck shirt underneath.

“The reason I wore this was because during my time at Rowdy there was always this running joke that I was like Anna Wintour because my name was Ana Escalante.” she said. “I really ran into Anna Wintour. I was literally standing next to her in my Anna Wintour cosplay.

Enjoy what you read? Get The Alligator content delivered to your inbox

Moreno described this event as “showing what the arts could do” by mentioning how UF is not an art school and looks more into STEM majors.

“I think it was the perfect way not only for Rowdy’s staff to meet each other, but also for everyone in the small community of Gainesville who has a passion for the arts or not even just as a passion for something. to come together and just share this moment, ”Moreno said.

Moreno, a 19-year-old second-year UF political science student, also mentioned how important it was for Rowdy’s staff to contact local designers at Gainesville 333, 444 and Nature’s Dye.

“It was really cool because it’s kind of the same aspects of the Met Gala, but more of a Gainesville style and a Rowdy style. So anyway, it always brings all the interest to bring everyone together, ”said Moreno.

To fit the theme of the event, “In America: A Fashion Lexicon,” Moreno wore his mother’s vintage black dress and black gloves. Her inspiration for the night was Audrey Hepburn.

Isabella Escudero, a 19-year-old second-year marketing UCF, came to Gainesville overnight just to attend Rowdy’s viewing party. She heard about the event from a friend who works at Rowdy.

“I am a major in marketing. So I’m kind of interested in how things are presented and how they can be executed.

“For this event, it was cool to go on a more college stage, but dress up,” Escudero said. “I think Rowdy should definitely keep doing more events like this.”

The Independent Florida Alligator has been independent from the university since 1971, your donation today could help #SaveStudentNewsrooms. Please consider donating today.

Alexis Carson is in his third year of journalism and a writer at the Avenue. In her spare time, she enjoys watching horror movies and going to concerts.