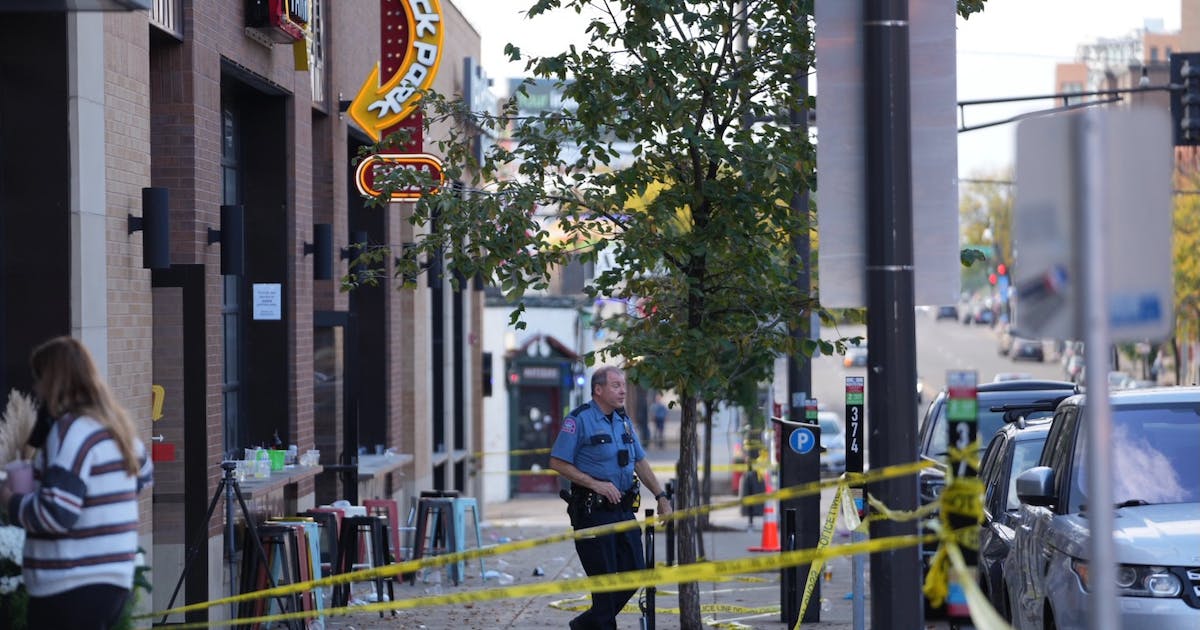 A woman died and 14 people injured in an early morning shooting at a bar in St. Paul, the largest mass shooting in the city in recent history.

Shortly after midnight Sunday morning, police said people began to “frantically” call 911 and ask for help. Police arrived on a chaotic scene at Seventh Street Truck Park, a bustling bar and food court on the 200 block of Seventh Street West, to find more than a dozen gunshot victims. A woman in her 20s was pronounced dead at the scene, authorities said.

“My heart breaks for the woman who was killed, her loved ones and everyone in this bar this morning,” St. Paul Police Chief Todd Axtell said in a statement. “In an instant, they found themselves caught in a hell of a situation. I want them to know that we have the best investigators in the country, and we won’t stop until we find those responsible for this madness. We will do our part to hold them accountable. “

Police arrested three men, aged 33, 32 and 29, who were injured in the shooting and taken to area hospitals for treatment. The Star Tribune generally does not name suspects until they are charged.

Police spokesman Steve Linders said he was not aware of any recent calls to the police department at Seventh Street Truck Park. He said the department’s video team is collecting and reviewing security footage from the bar.

The shooting took place in a popular dining and bar area along West Seventh Street, about a block from the Xcel Energy Center. The street is home to long-standing restaurants and bars such as Cossetta, Mancini’s Char House, and Patrick McGovern’s Pub. In recent years, the neighborhood has experienced a construction boom, with several high-end apartment and condo buildings, as well as new breweries, restaurants and bars, like Truck Park.

“It’s just not on our radar as a place where we see this sort of thing,” Linders said. “We don’t see that sort of thing anywhere.”

DJ Peter Parker, radio host for the former GO 95.3 station, said he has been doing a show at Truck Park every Saturday for the past four months. He’s been performing for two decades across the country in cities notorious for violence like Baltimore, Boston, and DC. But he’s never had to dive from a stage to avoid gunfire.

“I have never seen anyone shoot inside a party,” he said, calling the scene “horrible”. “Especially in a place where we thought it was a very safe place.”

Parker said he was reading the play from the stage and did not see a fight or altercation leading to the shooting. “You can sense when there is going to be a fight,” he said. But on Saturday night it was a good crowd, with “college vibes” and mostly young women.

“It was a fun night, then it suddenly ended horribly. No one could have predicted what happened,” he said. “It happened in a way that didn’t really make sense. All I heard was crazy gunshots.”

Parker said around 12:15 a.m. a dozen shots were fired and everyone fell to the ground. He turned off the music and heard everyone screaming. Within seconds, the crowd ran outside the bar and he saw several people on the floor, including the woman who was killed.

The consequences on the outside, he said, have been “chaos”.

“It was a bad scene because there are so many people who got shot,” he said. “My heart is broken for the girl who died.”

Northbound Seven Street was reduced to one lane on Sunday morning just outside Truck Park as a yellow barricade at the crime scene stretched from Chestnut Street to the sidewalk just outside of Hampton Inn and Suites.

Outside the truck park, debris of leaves and plastic cups littered the cordoned off sidewalk. A Saint-Paul police forensic van parked inside the barricade along with several other vehicles that remained there on Saturday night. People walking around in the morning and in Minnesota Vikings gear walked out to watch the game take center stage by taking photos and pointing fingers.

On a Sunday morning walk with her labradoodle Shiloh, Amber Remackel was so overcome with emotion that she sat at a table outside of Cossetta and cried. The mother and the school counselor said she had lived in the neighborhood for six years and had never seen such violence.

“It’s way too close to home,” she said, wiping away her tears.

Remackel said she had just picked up her 21-year-old daughter and a group of friends from Iowa State University on Friday night at Truck Park. “It’s a fun place in St. Paul,” she said of the bar, which is always packed on weekends.

“I walk around this neighborhood all hours of the night with my dog ​​and never felt unsafe,” she said.

Dave Cossetta, owner of the restaurant which has been in the neighborhood since 1911 and on West Seventh Street since the 1980s, said crime was a growing concern in the area. He said he and other area business owners blame the rise of Freedom House, a homeless shelter a few blocks from Cossetta.

“Seventh Street has become a lot more dangerous lately,” Cossetta said. “There have been a lot of more problems than ever and it’s been pretty much like this for over a year. I don’t know the circumstances across the street, but it’s a common theme these last time.”

Cossetta said there had been clashes outside his restaurant and he said guys pulled knives at people in broad daylight.

“It’s scary,” he said. “There are things going on during the day. At night it just speeds up.”

He said city officials had not listened to the concerns of local business owners about the recent wave of criminal activity.

Molly Jalma, executive director of Listening House, which operates Freedom House in the former West Seventh Street fire station, said she spoke with the shelter’s police officer who was working on Saturday night and has said Freedom House guests had no involvement with the filming.

“It wasn’t a homeless people issue,” she said. “It is a problem of gun violence.”

Linders said his partner in the department for 15 years “remembers nothing like this during his tenure.”

“We have a very busy bar, a lot of people are having fun and then we had a few individuals who decided to pull out their guns and pull the trigger indiscriminately, with no regard for human life… It’s just a tragedy. “

As the police continue to investigate, “our work to develop more proactive and comprehensive public safety strategies is more urgent than ever,” he said. “We will never accept violence in our community.”

US Representative Betty McCollum, who represents St. Paul, issued a statement saying that “the epidemic of gun violence plaguing the Twin Cities struck us in St. Paul with a mass shooting that can only be described as a horror”.

She said her prayers are with the victims and pledged her support to the St. Paul Police Department.

“I am committed to keeping St. Paul safe and that means working with all community leaders to get guns off our streets and the hands of criminals,” she said. “We must never allow this kind of crime to happen again.”