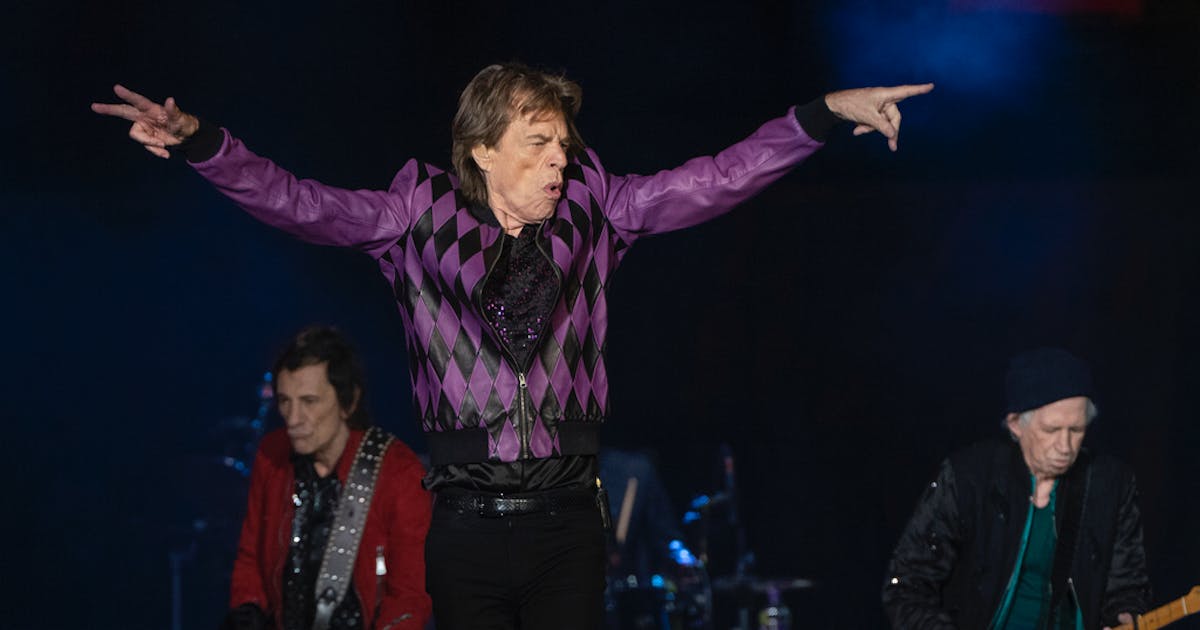 Many fans were still disappointed to lose Charlie Watts, still troubled by the additional one-year wait and still a little worried about the safety of COVID at the Twin Cities’ biggest concert since the start of the pandemic.

Those who showed up at US Bank Stadium for the Rolling Stones concert on Sunday night, however, ignored all those lingering worries with the same mantra that has followed the legendary British band for 47 of their nearly 60-year career.

It’s all rock and roll, and, boy, do they still love it – maybe more than ever, in fact.

The turmoil and loss leading up to the long-awaited Stones gig has likely kept some fans away. It was a rare case where the band did not sell the venue. But the 45,000 who showed up did so with dazzling smiles and agitated tongue logos.

“I’m a little nervous to be here, but I wasn’t going to miss the Stones,” said a masked PJ Kintop from Minneapolis, who first saw Mick Jagger & Co. in 1972 at the Met Center.

“Tonight will be a very emotional and powerful time,” said Minneapolis rock veteran Robert Wilkinson of Flamin ‘Oh’s Fame. “These are my boys. They are what a rock and roll band should be.”

As Texan opening band Black Pumas got the crowd going at 7:30 p.m. – earning a fairly enthusiastic reception at the end of the set – fans still made their way through the stadium’s crowded lobby to stock up on beer and pick up the. $ 50 t-shirts. Among the shirts was a special edition Minneapolis featuring the city skyline and the reshaped Chain of Lakes as the group’s iconic logo on the tongue.

No proof of vaccination or other COVID-related requirements was implemented at the concert, making some fans nervous but others relieved.

“It was nice to know the injections weren’t needed or we wouldn’t be here,” said Sherry Vennes, an unvaccinated Maple Lake fan. “Let everyone decide for themselves.”

The Stones’ playtime at 8:45 p.m. was preceded by a video tribute to Watts, their founding drummer who died of natural causes at the age of 80 in August. Even before his death, it had already been announced that he would not be on the tour, and Steve Jordan – a longtime sideman of Stones guitarist Keith Richards and other legends – would take his place.

“It’s sad, because Charlie felt like an old friend,” said Parrel Caplan of Minneapolis, who was one of under 300 fans, mostly teenagers, to attend the Stones’ first show in Minnesota at the Danceland Ballroom Excelsior in 1964.

“They all feel like old friends so I always want to see each other.”

Kent Mortimer, a veteran Twin Cities drummer, explained his mixed emotions this way: “Steve Jordan is probably the only drummer besides Charlie Watts who could be in the Stones.”

Sunday’s concert was the 12e Jagger, Richards and their crew came to Minnesota on tour to return to those lukewarm, uncrowded 1964 debut. Yes, the kids, even the Stones had to work to get bigger and better.

The group’s most recent stop at the then-TCF Bank Stadium in 2015 was actually one of their best-received Twin Cities shows of all time. The notoriously bouncy and muddy acoustics of US Bank Stadium have been cited by many Stones fans for their aversion to attending on Sunday – although the bad sound is nothing new when it comes to the Stones’ dates in Minneapolis. .

“My concern about the sound quality is a result of my continued trauma of seeing them inside the Metrodome,” said Mike Wiley of Minneapolis, who did not attend the concert. He was referring to the band’s three stops on the equally confused Dome tour from 1989 to 1997.

Attend his 10e Stones show, White Bear Lake’s Jim Nethercut considered the 2015 concert to be a peak performance – and so he entered Sunday’s concert with expectations met.

“I was thinking [2015] would be their last show here, “Nethercut said,” so I consider this one like frosting on the cake. “

With the three remaining core members of the Stones (including guitarist Ronnie Wood) just behind Watts in age, many fans have wondered if this could really be the band’s last time in Minnesota.

Jeff Gilbertson of Barnum, Minn., Brought his teenage daughter and son to the show at their request after seeing the group three times before without them.

“I think they recognize this as their only shot to see the Stones and they know they will remember it for the rest of their lives,” Gilbertson said. “Seeing it through their eyes [is] quite impressive. “

The Stones took the stage to the hard-hitting riff of “Street Fighting Man” and followed with the inviting “Let’s Spend the Night Together”. Then Jagger directly waved to the crowd.

“Hello Twin Cities! Hello, you Sotans!” shouted the still sharp leader, his composure still palpable enough to forgive the fact that no one ever calls us like that.

Jagger also detailed a surprisingly cool itinerary of his extra days in town before the show.

“I’ve had two Jucy Lucies here: one at Matt’s Bar and one at 5-8 Club, washed down with a Grain Belt, Fulton and a Surly, finished at Grumpy’s Bar.”

Read how the Stones and the stadium itself fared in the review of Jon Bream’s concert on startribune.com or in Tuesday’s Variety section.