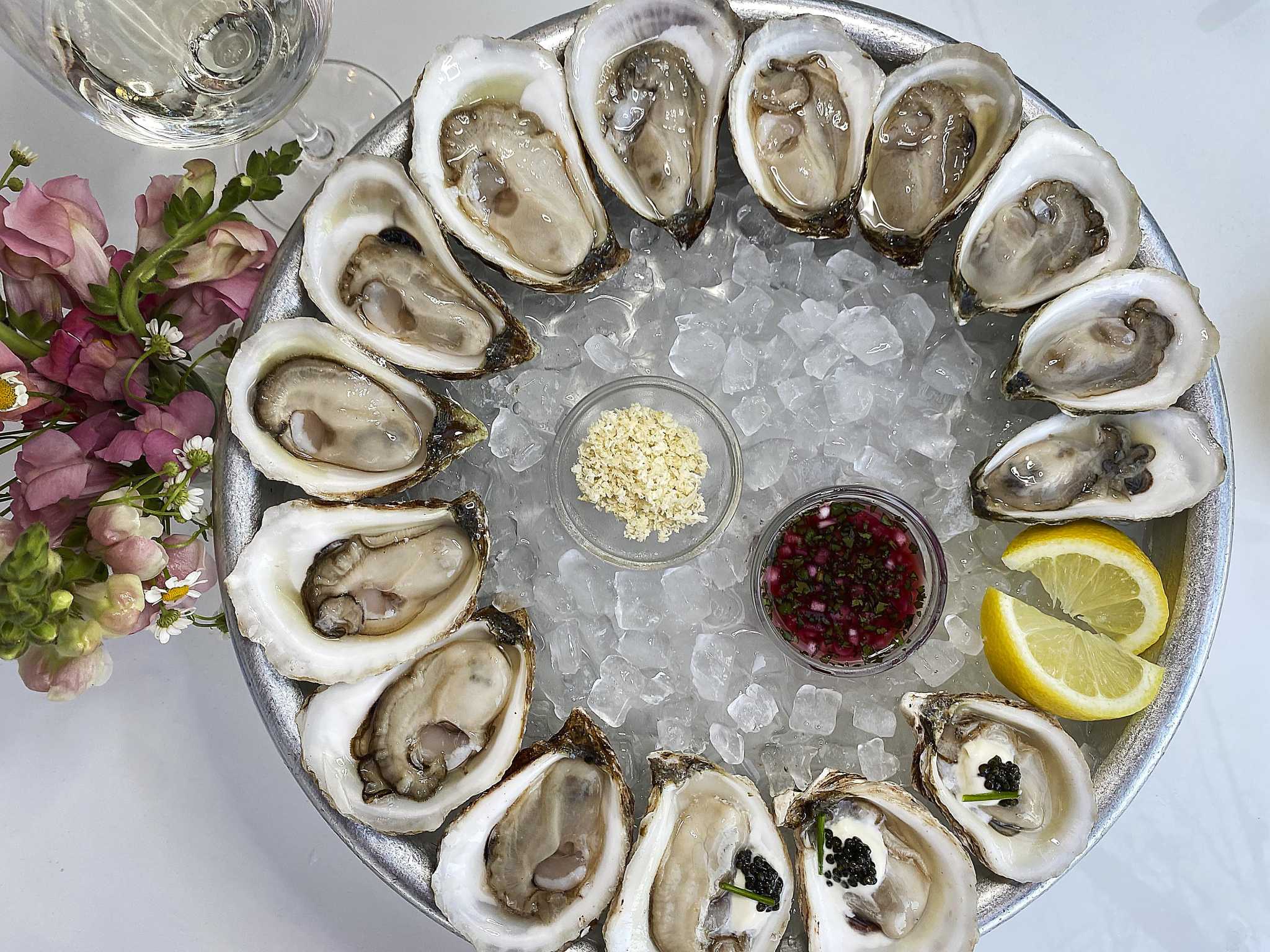 Little Em’s oyster bar appears to have been designed by social media influencers for maximum Instagram impact: the minimalist pink oyster shell sign, the pink rail along the sidewalk, the pastel rose blossoms on the menus, the pink stools, the pink hats on every guy in the kitchen. Did I mention the pink?

There’s no other way to put it: Little Em’s is cute. Even the origin story is cute. It came to Emily and Houston Carpenter as a vision in 2019 after an idyllic trip to Paris, where oysters and champagne inspired them to ask, “Why not San Antonio?

A year later, they had converted what was once a gas station on South Alamo Street in the historic King William district into a small white cottage with striped awnings and a street side patio where the spot-the-designer is a spectator sport: Cartier Love bracelets, Chanel watches, Louis Vuitton bags, Golden Goose sneakers.

Little Em’s isn’t just an oyster bar, it’s a boutique oyster bar gift set. They’re doubling down on Little Em’s success by transforming the old Feast building across the street into an upscale surf and turf restaurant called Up Scale, which is slated to open later this year.

It would be easy to stop there, for Little Em’s to do just being cute. But it is so much more. It’s a serious place determined to go beyond oyster shelling and corks, which it does with a range of creative cold seafood dishes and thoughtful tangents like a lox bagel, some serious crab cake, even a good burger with some of the best French fries in town.

On ExpressNews.com: East Coast Oysters: 5 of San Antonio’s Best Oyster Bars, Restaurants to Get Them

But first. The waiters at Little Em’s know their oysters like a sommelier knows wine, and they’re happy to sing about the intricacies of whimsical East Coast varieties like Barstool Cocktail, Raspberry Point, and Little Beaches.

Whatever their subtle differences, they all had this in common: They were served cold and clean, with shells washed without fragments, resting in their native brine, as shiny as strings of tasteful white pearls on ice, with tangy blood orange mignonette and minced horseradish that you absolutely don’t need. You also don’t need them dressed in points of caviar and crème fraîche, an assignment that added costs to no avail.

The simplicity that served the oysters so well extended to a raw salmon carpaccio carefully tiled like slices of sashimi in a sushi bar, dressed simply in salt and a ring of capers in olive oil. . The razor-sliced ​​raw scallops bloomed with lemon and sliced ​​jalapeño, although I would recommend taking small bites of pepper rather than the rings which were almost as big as the scallops themselves.

Ceviche is also part of the appeal of cold dishes, but when a a salmon ceviche and a red snapper ceviche came to the table, I wondered if their little bowls were the garnish. But no, it’s just the micro-portioning that keeps good fish from costing even more than the $ 17 or $ 18 price tag here. The salmon glistened with a mix of cucumber, dill, cilantro, lime and little hot peppers which improved rather than stepping on the fish, something I can’t say for the red snapper, a degree too sweet in his mango bath.

Little Em’s knows how to showcase caviar, because the show is a big part of a few spoonfuls of fish roe for $ 90. The Russian osetra is not just fish eggs; they are small buttered pearls of the purest fish essence, arranged with bone spoons, perfect little pancakes called blinis and a clever platter of chopped red onions, chives and boiled egg with the fresh cream.

Little Em’s fresh and fresh side was balanced by more robust plates, including a toasted bagel stacked with an enviable amount of salted salmon and a creamy Boursin cheese schmear, a staple suited to this more flowery setting. A chunky crab cake held up despite the noticeable lack of topping for one of the best I’ve had in town, a symphony of sweet crab playing against a creamy base of creamy avocado.

And if you don’t fancy seafood, Little Em’s makes a helluva cheeseburger, evenly seared with melted cheese, hot sauce and a shiny brioche bun branded, like everything Little Em’s, with that shell logo. oyster.

Hours: 11 am-10pm Wednesday to Saturday; 11 am-4pm Sunday. Possibility of catering on site and to take away.

*** Average, with some notable points

** Poor, with a buyback factor or two

* Bad, nothing to recommend

Food critics on Express-News pay for all meals.

It wasn’t all cute and sweet. A plate of clams with linguine has gone simple in its way as a sub-sauce and dry. A Caesar salad committed the pedestrian sin of tasting regular romaine with ranch dressing instead of bringing the anchovy funk, and a lobster roll tried way too strong, with the tarragon distracting the taste of the lobster for which we paid $ 28.

And as elegant as everything else, the desserts looked messy, from a plain white sherbet dish that tasted like a palate cleanser to vanilla creme brulee in every sense of the word.

Let’s get back to the cute part, though. The powdery pink bonhomie that permeates every aspect of Little Em’s experience transforms the cuteness of a patronizing diminutive into something ambitious and inspirational. The box, and most of what it contains, is tied with a cute little knot that says “why not San Antonio?” “With a” yes, why not?