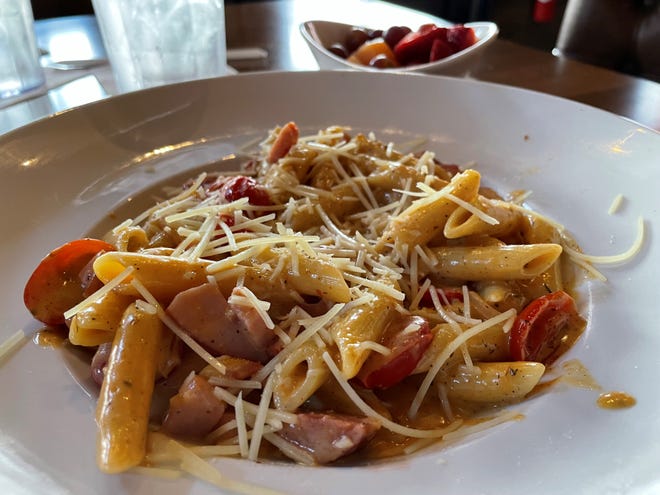 I reviewed Blackhorse Pub & Brewery in 2013, while still at Western Plaza. Haven’t tried the downtown location, but recently decided to check out their new Alcoa digs. Spouse Grub and I arrived to find the fully renovated public works building parking lot and an hour of waiting to be seated.

There were plenty of tables in the outside courtyard where guests could wait with a drink, but the spouse and I relaxed in a few comfortable chairs inside. I ordered the Blackhorse IPA and found it struck a nice balance between hops and fruitiness.

We waited a full hour before being shown to a nearby dining table. We had already had plenty of time to go through the menu and make our decisions. The appetizers feature familiar dishes like chicken fillets, spinach dip, and fried green tomatoes, but we also spotted soft pretzels, fried Brussels sprouts, and black bean hummus in the lineup. A number of salads are also available for those who want a light appetizer or a side dish of greenery.

The rest of the menu is generally categorized into sandwiches and burgers, entrees and pizzas. The sandwiches include prime rib, Ruben, chicken wrap and Mellow Mushroom, a grilled portabella mushroom with red peppers, lettuce and tomato on a multigrain bun.

The burgers come in 10 different varieties, but The Spouse chose the Fondue Galette ($ 12.50), made with ground beef, two slices of American cheese and sautéed onions on marbled rye bread. The spouse chose sweet potato fries as an included side dish. The other options were onion rings, macaroni and cheese, baked sweet and white potatoes, beans and rice and broccoli, to name a few.

I was tempted by Blackhorse’s selection of eight flatbreads and 14 specialty pizzas. Examples include Philly flatbread (made with beer cheese and grated prime rib) and Courthouse pizza, made with Italian sausage, red peppers, onions, and garlic.

I made my choice in the entrees section, which offers Baja shrimp tacos, grilled salmon and several pieces of steak. I had the Cajun pasta ($ 12) – penne in a spicy Alfredo sauce, with andouille sausage, ham, red peppers and onions. It didn’t come with a side dish, but I added a fresh fruit side for $ 2.95.

Our server let us know straight away that he was still in training. He did some minor ailments at the start, although they weren’t important to us. The only time his serve came into play was when we needed ketchup for fries, and he was nowhere to be found for a long time. The waiter who was training him finally came to our rescue.

The meal itself was good, but not exceptional. Melting the patties was a simple effort, no surprises. I was quite happy with the Cajun pasta. For me, andouille makes everything better. I didn’t find the sauce particularly spicy, but the portion was a reasonable size. Not enough to split into two meals but certainly more than adequate for one sitting.

Our server’s trainer had to step in again to take our dessert orders and deliver a takeout box for half the fondue galette. We ended up splitting a slice of cheesecake topped with caramel frosting for $ 5.50. I wouldn’t mind going with separate slices for the two of us, but I was already pretty stuffed with the pasta.

Overall, I think Blackhorse Pub & Brewery has a lot to offer the Blount County Market, including a varied menu, house beer, and an extensive cocktail menu. They also serve brunch on Saturdays and Sundays, with a selection that ranges from shrimp and oatmeal and Egg Benedict to chicken and waffles and traditional drinks from the bar for brunch.

I don’t think their food is going to change anyone’s life, but Blackhorse is certainly a viable food and drink option for locals willing to tolerate the long waits that might be on the line until the hubbub. initial goes out.

That household name on the Knoxville restaurant scene has spread to Blount County with its brand of pub food and house beers.