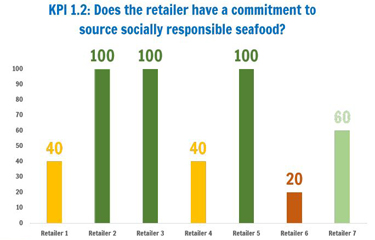 Social Responsibility Commitments and Actions of Most Canadian Retailers continue to be inadequate and nowhere to be found, according to the fourth Seafood Progress report by the NGO SeaChoice.

Despite improvements over the past year, only two of the major food retailers label their seafood with all the elements necessary for customers to make informed decisions, such as the scientific name of the species, l Geographic origin, wilderness versus farming and gear type or farming method, SeaChoice supply chain analyst Dana Cleaveley told SeafoodSource.

In addition, three retailers continue to make no effort to support improvements in skipjack management, she said. And none of the eight retailers – including Walmart Canada, Costco, Sobeys, and Co-op – have committed to only selling skipjack tuna that meets the highest standards for sustainability, such as being certified by Marine Stewardship. Council, recommended by Ocean Wise, or considered a “best choice” by Seafood Watch, according to Cleaveley.

At the same time, the number of retailers who include all the seafood they sell as part of their sustainability commitments has doubled, thanks to initiatives by Walmart Canada and Co-op, according to the organization no. government based in Vancouver, British Columbia.

“The global pandemic has dramatically increased the profitability of Canadian grocers. Retailers have more opportunity than ever to place at least as much emphasis on social responsibility and environmental sustainability as they do on profits, ”said Cleaveley. “Retailers need to do more to meet their customers’ expectations for legally and responsibly produced products through active due diligence and effective traceability. ”

Four retailers do not include branded canned or seafood products, such as High Liner and StarKist, in their sustainability commitments.

“As a result, a significant amount of seafood that these companies sell could be unsustainably harvested and violate human rights laws,” SeaChoice said.

Cleaveley congratulated Buy-Low Foods, METRO and Save-On-Foods for sending letters earlier this year to the federal government of Canada supporting the development of an effective boat-to-plate traceability system for all fruits of sea ​​sold in Canada.

But more needs to be done to tackle human rights violations in the seafood industry, SeaChoice said.

“The lack of this traceability makes it far too easy to support slavery and irresponsible fishing practices in seafood supply chains. Retailers have an important role to play in advancing this regulation,” SeaChoice said.