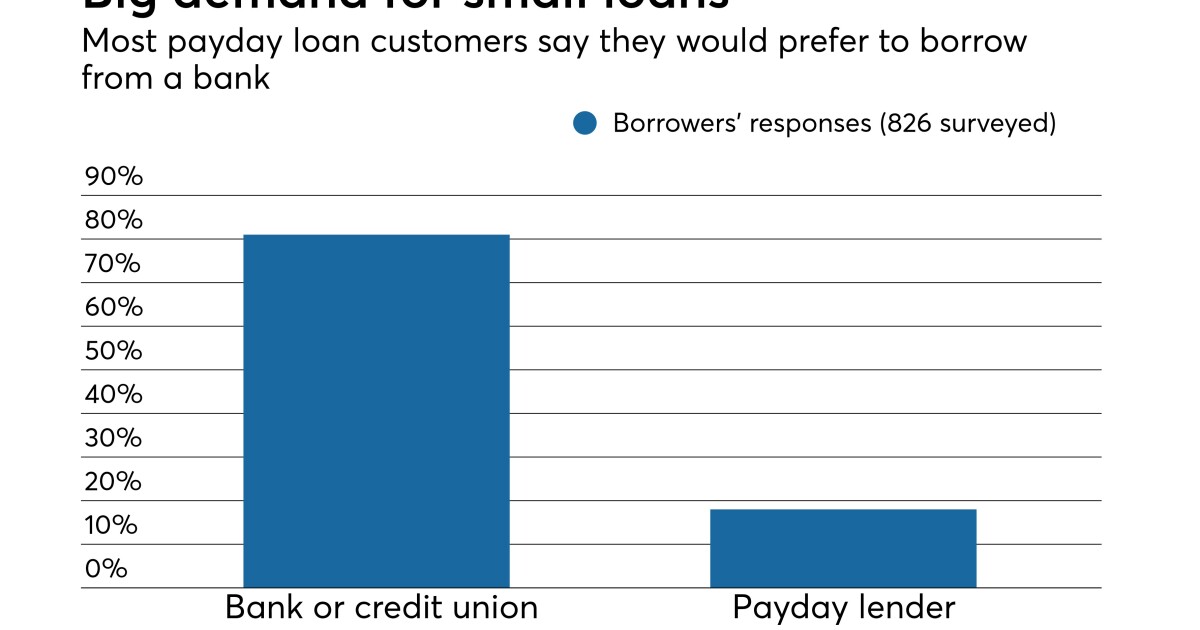 Almost four years after banks quit the deposit advance business, some are considering a comeback, this time looking to take a different approach.

But it’s unclear what their business model would look like.

It was a key part of the third quarter earnings season, which ends this week. At least two big banks – Fifth Third Bancorp and US Bancorp – have expressed interest in returning to short-term lending, once a major source of fees, while others are examining their options. But executives said it was too early to talk about how they plan to design a loan that is profitable for their businesses and safe for consumers.

“We’re trying to determine what the correct answer is,” said Greg Carmichael, CEO of Fifth Third Bancorp in Cincinnati, in an interview after his company’s earnings call, noting recent changes in regulation of small dollar loans. . “What’s most important is… we can help our customers when they have emergency shortages. “

Asked how US Bancorp in Minneapolis would generate income from a small dollar loan product – either through interest income or through fees – CFO Terry Dolan said it was simply too early to tell .

“I don’t even know that information,” Dolan said in a follow-up interview after the US Bancorp call, noting that the company was in the early stages of planning. “You could definitely see how this could be structured like a deposit service fee.”

The lingering sense of uncertainty is notable.

Banks had generally left the business to avoid breaking payday lending and anti-predation rules. Yet last year several major banks were on the verge of re-enter the low-cost lending industry with a detailed plan to provide short-term installment loans which they believe would solve the problem.

The business opportunity appears clear. According to a recent survey by Pew Charitable Trusts, over 80% of payday loan clients said they would prefer to borrow from a bank.

Yet the regulatory landscape is more turbulent than ever.

The Consumer Financial Protection Bureau released its long-awaited payday rule in October, impose stricter underwriting standards on loans of up to 45 days. Banks reinstating small dollar loans should carefully circumvent the requirements of this rule.

On the same day, the Office of the Comptroller of the Currency rescinded guidelines that discouraged banks from offering deposit-advance products, generally designed as short-term loans with one-off payments. Similar guidelines from the Federal Deposit Insurance Corp. remain in place.

“[I]It has become clear to me that it has become difficult for banks to meet consumers’ needs for short-term, low-amount credit, ”Acting Supervisor Keith Noreika said in a press release announcing the change. .

Over the next few months, the OCC is unlikely to issue guidance setting out a detailed path forward for small loans. Instead, the agency will likely take a proactive approach to working with banks interested in designing a small loan, said Valerie Hletko, a lawyer at Buckley Sandler.

“This is a great opportunity to have a regulatory lab,” Hletko said, describing the challenge of designing a profitable small dollar loan in the current regulatory patchwork. “They will let the banks be guided by their good judgment, usually in consultation with their examiners.”

National banks such as US Bancorp could potentially design an early deposit product that avoids the more onerous underwriting standards offered under the CFPB payment rule, the lawyers said.

Key elements of such a loan would involve a term of over 45 days and no lump sum payments, experts said. A simple cost structure and consumer information, of course, would also be important.

Still, consumer advocates have said banks are unlikely to be interested in relaunching anything resembling their old early deposit products, which aroused great controversy A few years ago. A handful of big banks – US Bancorp, Fifth Third, Wells Fargo, BOK Financial and Regions Financial – left the company in January 2014, under pressure from regulators.

“I really hope the banks don’t consider reverting to the old deposit advance products,” said Lauren Saunders, an attorney at the National Consumer Law Center. “They were payday loans by another name.”

When asked if they were considering a return to small dollar lending, neither Wells nor BOK expressed interest. Both companies are regulated by the OCC.

“The latest OCC guidelines don’t change things for us,” a spokeswoman for San Francisco-based Wells said in an email.

BOK has “nothing substantial to add at this time,” said a spokesperson for the Tulsa, Oklahoma, company.

The regions, meanwhile, “are reviewing updated regulatory guidelines for small loans,” a spokeswoman for the Birmingham, Alabama company said in an email.

The regions and the fifth third are state chartered banks and the Federal Reserve is their main regulator.

With the future business model for small dollar lending fluctuating somewhat, consumer groups are urging the banking industry to consider a number of new approaches.

Such an idea who got support from Pew and other groups would involve the design of small installment loans with monthly payments capped at 5% of a borrower’s monthly income.

The loans could be a few hundred dollars and due over several months, to fit the budgets of low-income customers, according to Nick Bourke, director of consumer credit at Pew.

“I think there are a lot of banks that weren’t part of the deposit advance that are looking at making small installment loans,” Bourke said. He noted that automating the underwriting process would also make loans profitable.

However, even small installment loans could still trap borrowers in unwanted debt cycles, according to Rebecca Borne, an attorney at the Center for Responsible Lending.

To avoid this, banks need to assess borrowers’ monthly recurring expenses – in addition to their monthly income – to make sure they can afford monthly debt service.

“The expense side of the equation is critical,” Borne said.

Over the next few months, consumer groups have said they will seek more detailed advice from regulators and listen to information on how banks plan to move forward.

“We’ll see if one or two test the waters,” Saunders said.

During US Bancorp’s earnings call, CEO Andy Cecere said the company is looking to offer a new product in the coming quarters. Fifth Third said it was too early to commit to a timeline.